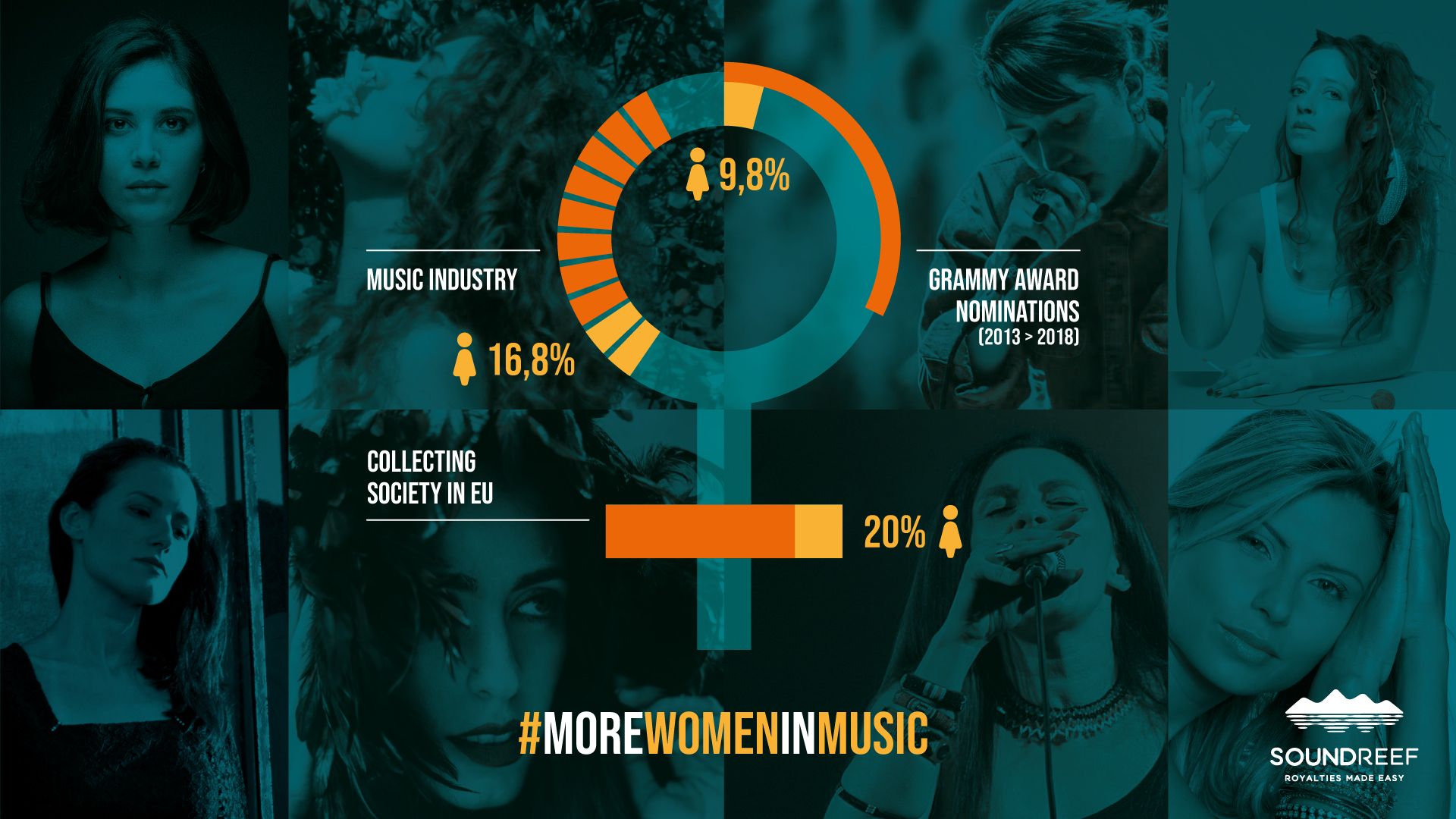 More Women in Music: there are only 16.8% of Women in the Music Industry. Soundreef’s Female Artists Join Forces

Gender equality in music!
We snooped around the internet in search of figures regarding the Music Industry and found out that charts, line-ups of Europe’s most important festivals, playlists of main streaming platforms and even data from Collecting Societies across Europe all say the same thing: there are far too few active female songwriters and performers.

Some of the figures

Why is this happening? But, more importantly, how can we reduce this gap?
We talked about it with some of Soundreef’s female artists and we decided to join forces to launch a message, or rather, make a wish: More Women in Music!

We too want to join those whose objective is to strive for change.
We want the Gender Divide to finally be 50-50.

Music has the floor

It’s time for music to stand up to these figures.
Click on the artist and watch the video.

Many studies have already been conducted on gender equality in the music industry, like Dr. Pauwke Berkers’ from the University of Rotterdam, which determined that:

To understand the situation more clearly, we talked to Rosella Sottosanti, founder of L’Eretico Booking agency, who has worked in the industry for a long time and has a pro-active stance towards the issue.

“The common belief that there are very few women in music is a myth: women, both in Europe and around the world, are working in all areas of this industry. Yet, the music industry is still mainly represented by men. This is probably due to mental and cultural barriers: on the one hand, women’s feeling of inadequacy and fear of showing themselves is fueled by a lack of acknowledgment by those who make decisions in this industry. On the other hand, men with power in the industry often spontaneously exclude women. It’s still very difficult for a woman to be taken seriously as an artist or as a professional figure. This is why women who work in the Music Industry should be given more visibility by increasing their numbers in line-ups of important festivals and shows and inviting more female guest speakers to talk in public events.”

What are Soundreef’s female artists’ thoughts?

“I don’t think women are more shy or insecure. We’re slowly moving forward but we have to work even harder, but it’s undeniable that gender stereotypes still persist.” – Lady Flavia

“I think sometimes women have self-limiting beliefs about themselves due to prejudice that is deeply ingrained in our families. Other times, we are determined to fight for our dreams, and due to these pre-conceived prejudices, we know we’ll have to work very hard to prove we are just like men. Women can be anything they want, not just a mother/wife. However, if they decided to work in music, science or politics they shouldn’t give up being a mother should they wish to and shouldn’t justify themselves should they not wish to. This is true for all sectors. I personally want genders to work together because having different points of view is very important. My band is the perfect example of this. Fortunately, I have never been discriminated against for being woman. Quite the contrary, in fact: Leda was born out of the diversity of its band members. However, it makes me very sad to see that this country still has shockingly backwards views in general, not just on this matter. – Serena, lead singer of Leda”

“We are definitely dealing with negative prejudice. Why? We should ask men that question.” – Tita

“People who congratulate me after shows often look surprised. They don’t expect a woman to play music that differs from their preconceived stereotypical female artist.” – Noireve, EDM producer

“In my personal experience I’ve never had to deal with what these figures show. I’m actually quite surprised. I think that if you want something, you can achieve it. Let’s get to work and start believing in what we do.” – Roberta De Gaetano

“I sometimes feel women don’t give their work enough importance. I’d like us to be bolder yet still pragmatic. I’m starting to learn that the creative side is as important as one’s working method” – Rosita

“Like many other forms of art, music requires discipline, hard work, planning and awareness. In all my years of experience I noticed that sometimes women tend to delegate. Like Man Ray used to say, ‘one must first master the rules before one’s able to break them’” – Killing Cartisano

“Female musicians have to face increasingly tougher challenges. Unfortunately, stereotypes and gender roles are still one of the main problems of our society: they limit our opportunities and makes us more insecure. This makes us lose control of our work” – Haiducii, Soundreef’s newest member, known for her record-breaking single “Dragostea Din Tei”.

We want to thank our female songwriters for this constructive discussion!